Get to Know About Anemia 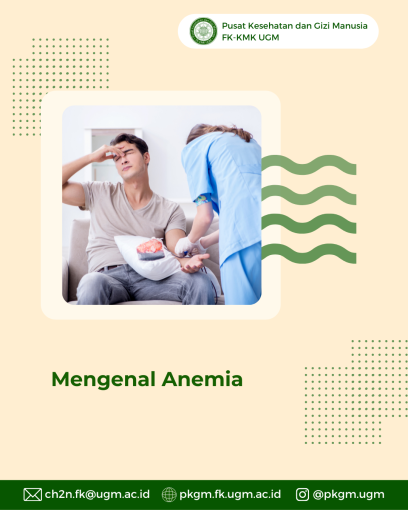 Anemia is a blood disorder condition defined by a lack of red blood cells in the body or the red blood cells can not function properly. This condition causes the body not getting enough oxygen. Anemia is a serious global health problem. Based on WHO, anemia still affects 42% of children aged <5 years and 40% of pregnant women. Symptoms that are often experienced by people with anemia are easily tired, easily drowsy, dizziness, and pale face. The most common cause of anemia is a lack of nutrients, such as vitamin B12, folate, vitamin A, and iron.

The following are some types of non-nutritional anemia:

Red blood cells are normally round and flexible, but in people with sickle cell anemia the shape of the red blood cells are sickle-like and stiff, so those can easily clog small blood vessels. Sickle cells can be damaged faster than normal cells and cause oxygen circulation in the body hampered. This type of anemia is a genetic disorder. Until now there is no cure for sickle cell anemia, but blood transfusions can be done to prevent complications.

Thalassemia is a genetic disorder in which the protein that forms hemoglobin can not be formed or insufficient so that red blood cells break easily. Treatment for this disease depends on the severity of the condition, usually requiring regular blood transfusions.

In addition, the following are some types of anemia caused by nutritional deficiencies:

Hemoglobin functions to transport oxygen which will later be circulated throughout the body. The body needs iron to produce hemoglobin. Lack of hemoglobin causes the body to lack oxygen supply. Initial screening for nutritional anemia can be done by assessing hemoglobin level. The healthy range for hemoglobin in men is 14-18 g/dL and in women is 12-16 g/dL In addition, if iron deficiency anemia occurs in pregnant women, it can interfere with fetal growth, increase the risk of premature birth, and even death of the mother and baby. Iron deficiency can be corrected by eating foods that are high in iron, especially those of animal such as meat, liver, milk, and eggs. In addition, increasing vitamin C intake can help the process of iron absorption.

Deficiency of vitamin B12 and folic acid can cause megaloblastic anemia. This type of anemia is a condition in which red blood cells are larger than normal or produce immature red blood cells. This condition reduces the amount of oxygen that can be carried in the blood. Vitamin B12 and folate have roles in the red blood cell regeneration process called erythropoiesis. If the body lacks these two nutrients, the formation of new red blood cells can be disrupted. Anemia can be prevented by meeting balanced nutritional needs. Vitamin B12 is found in eggs or fortified foods such as cereals, milk, cheese, and yogurt. Folic acid is found in beef liver, green vegetables, and beans.

Anemia that happens in the long term can cause damage to organs, such as the heart and lungs, since these organs have to try harder in carrying out their duties. If you experience regular symptoms such as fatigue, constant tiredness, and pale face, it is best to consult a doctor to get the right diagnosis and treatment.